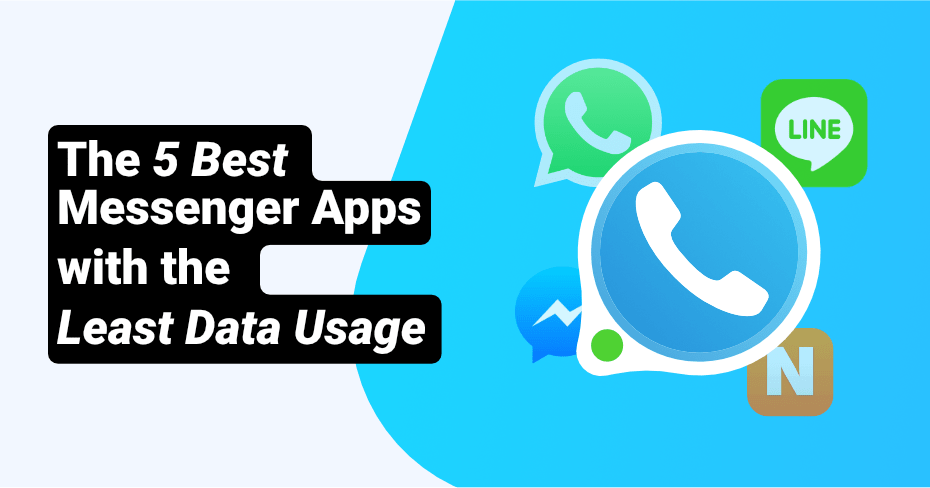 In some countries, networks offer unlimited data to its customers, which is a privilege not all smartphone users around the world have available. Paying per Gig is a common practice for many data users, and it can be easy to forget that a large portion of mobile internet users still deal with data this way. Considering these circumstances are quite common in everyone’s life and a least data usage feature is important for your messenger app, some favorite messenger platform development providers are paying more attention to decreasing their voice and video call data usage.

If you are interested in learning about some messengers you can download for free today, that are adopting this feature to use less data on calls or messages, then read below our list and choose the best app for you!

(This chart depicts a comparison of data usage for the 5 least data using messenger apps.) 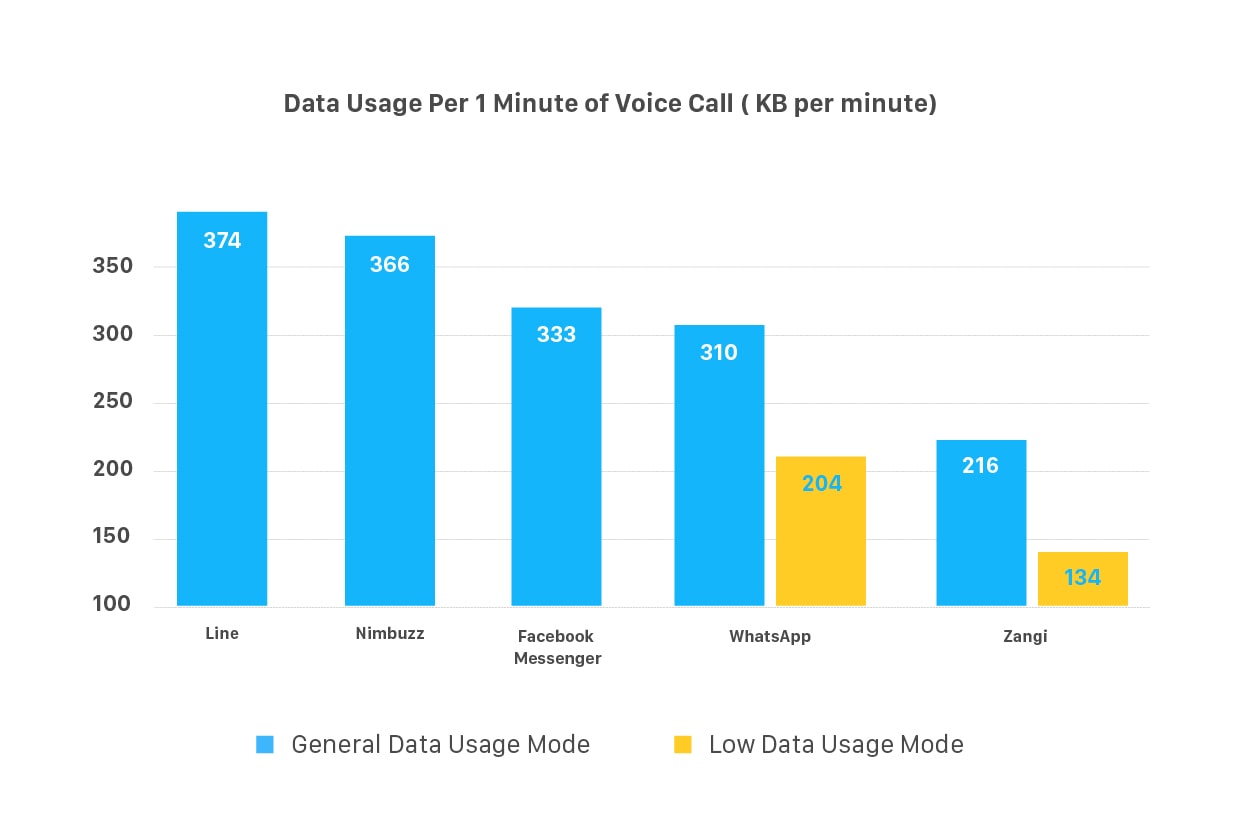 Let’s start with the app that uses the least data on voice and video calls without compromising quality. Zangi generally consumes 216KB of data for a 1-minute voice call. But by simply switching on the “low data usage” mode, users can save much more data, consuming only 134KB per minute.

This messenger app finds its competitive advantage in its unique code that enables them to work at such low data usage. In addition to helping users save on data, Zangi is also a renowned secure messenger which doesn’t keep your communication history on any of its servers, and all the messages are encrypted. 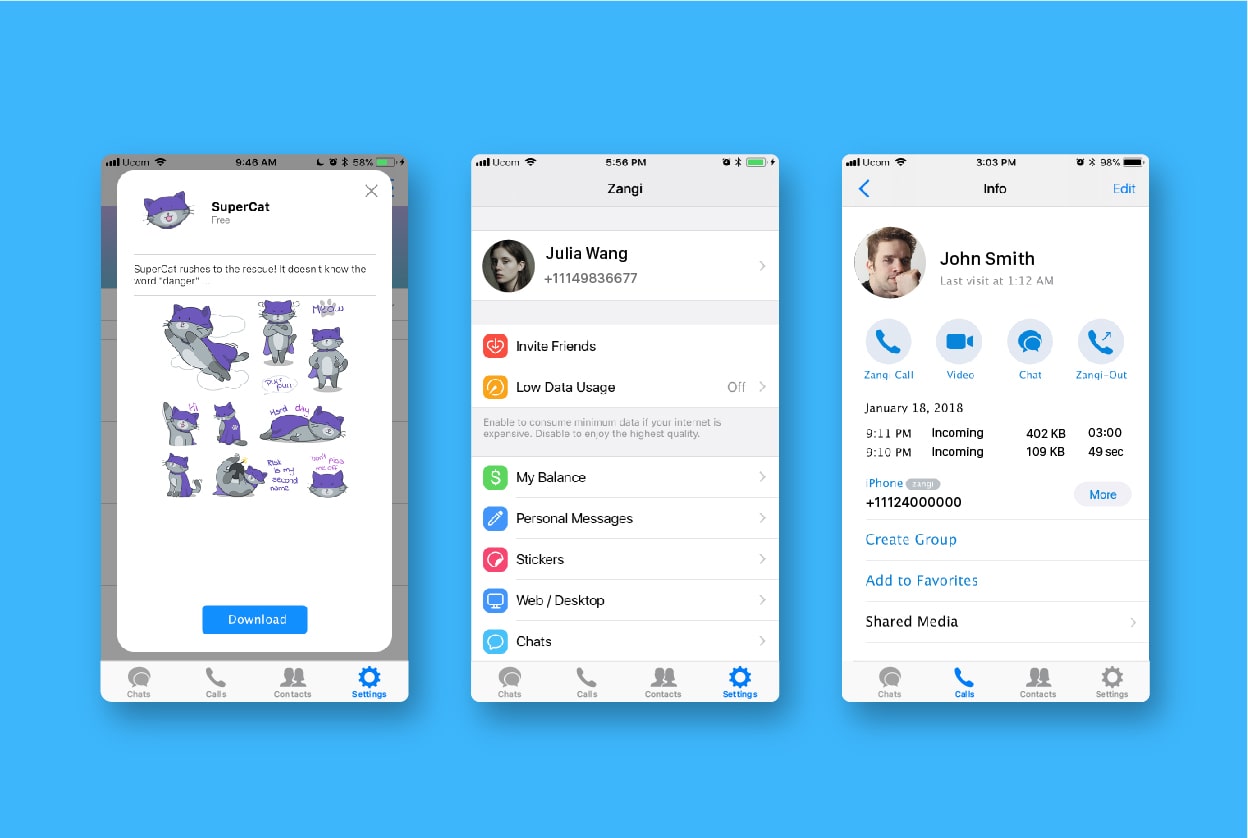 Generally consuming 310KB, and 204KB in low data usage mode, WhatsApp is the second messenger which has the least data usage. Consuming around 1.5 – 2 times more data compared to Zangi. WhatsApp is truly impressive with its daily user size and its quality messenger service.

Since its acquisition by Facebook, it is free to download and use, but we are crossing our fingers that Zuckerberg does not move forward with his monetization process and begin to include ads. 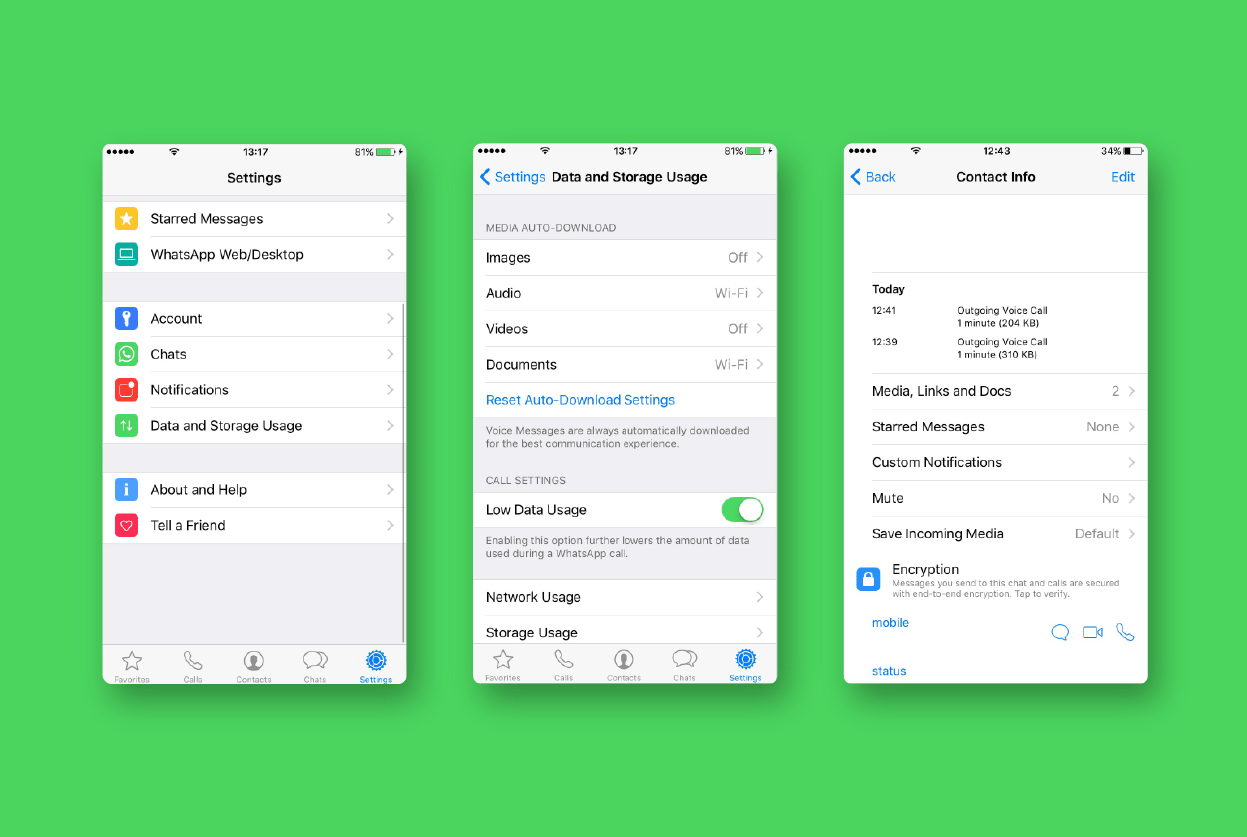 Taking into consideration that Facebook has purchased WhatsApp, it can apply the same methodology of WhatsApp to lower the Messenger data usage. Facebook and Whatsapp combined make up more than half of the worlds messenger app usage. 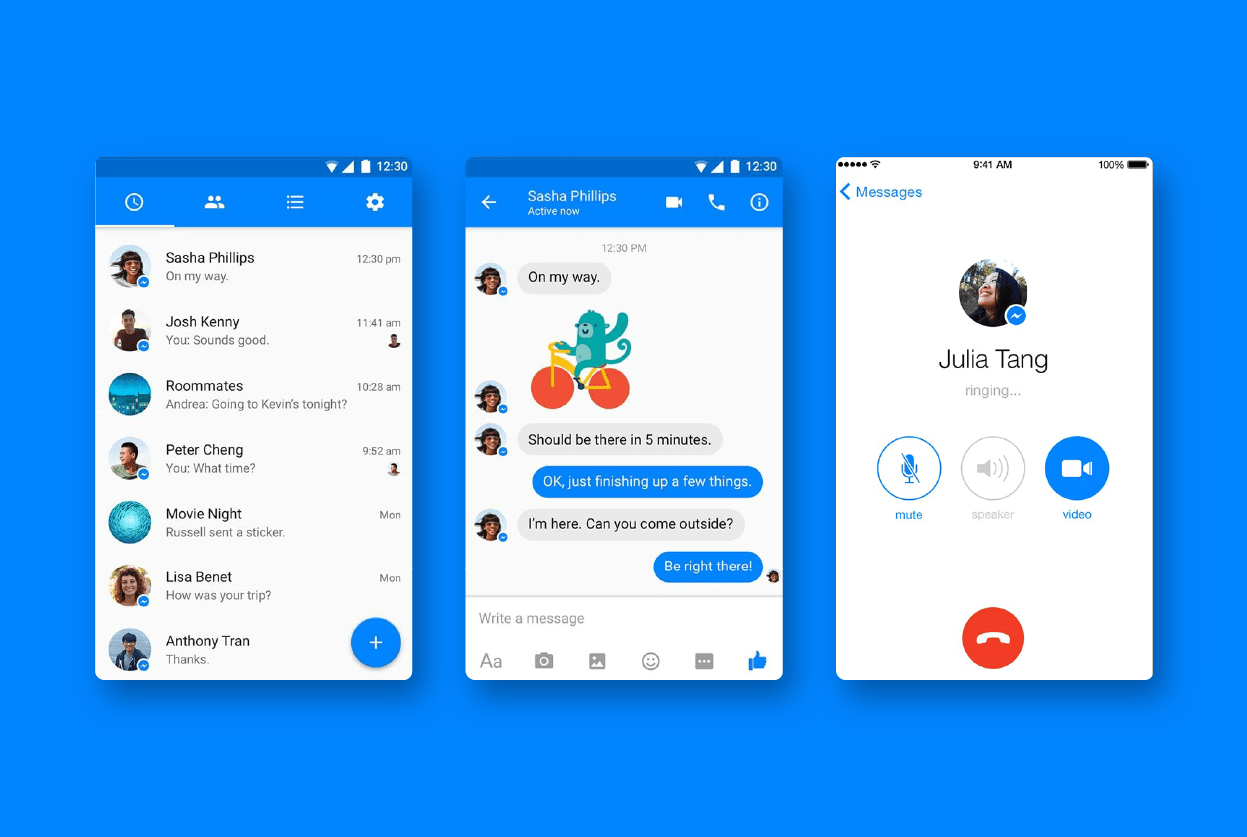 Founded back in 2006, the Dutch messenger app Nimbuzz has come a long way from the “Symbian” era into the present. The company is catching up with the trends and requirements of the market, especially minimizing the amount of data usage for communicating. Nimbuzz spends 366KB of data per minute on a voice call, making it the fourth most optimal messenger app, as far as data usage is concerned. 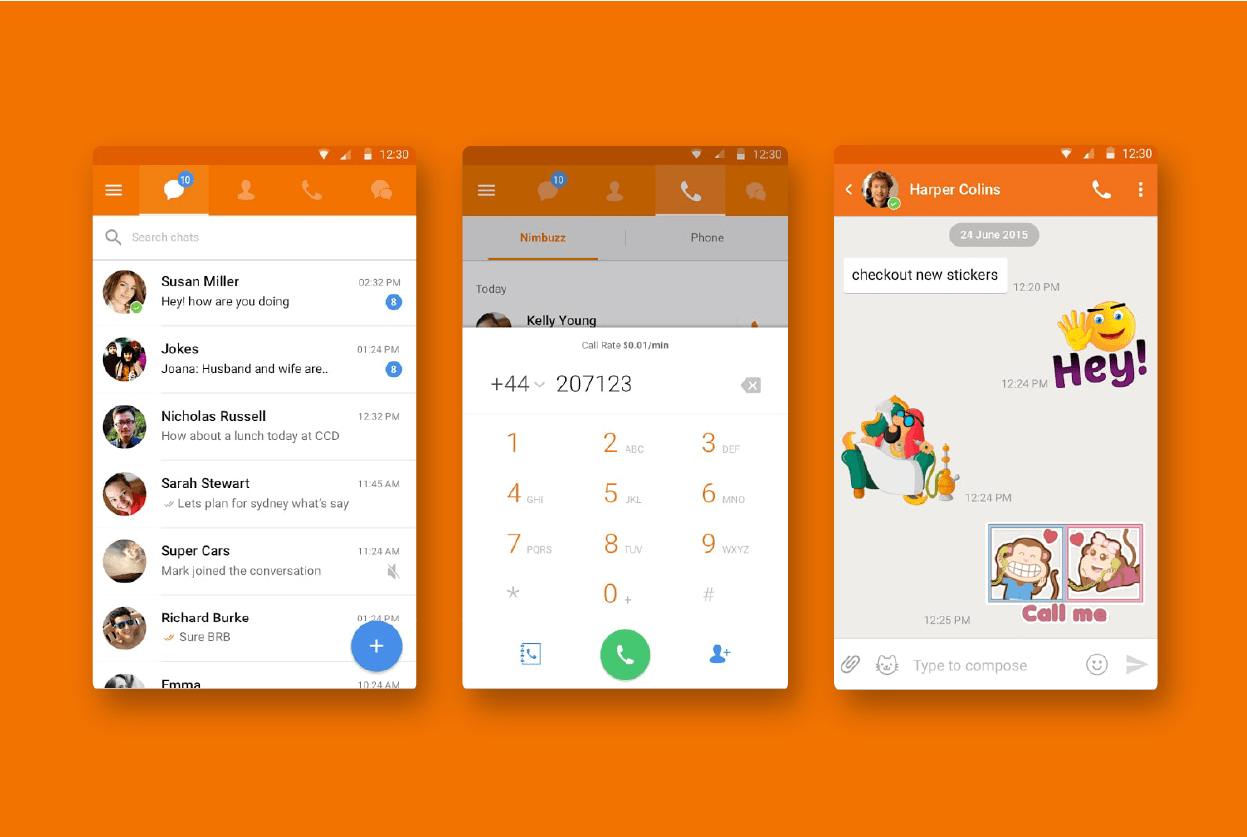 The LINE messaging app, first launched in Japan in 2011, was initially released as a disaster response tool for better and cheaper communication. It has experienced exponential growth ever since, considered to be one of the quickest growing user bases to the point of server overload. 374KB of data is spent per minute on a voice call with LINE, around the average that we are seeing here. 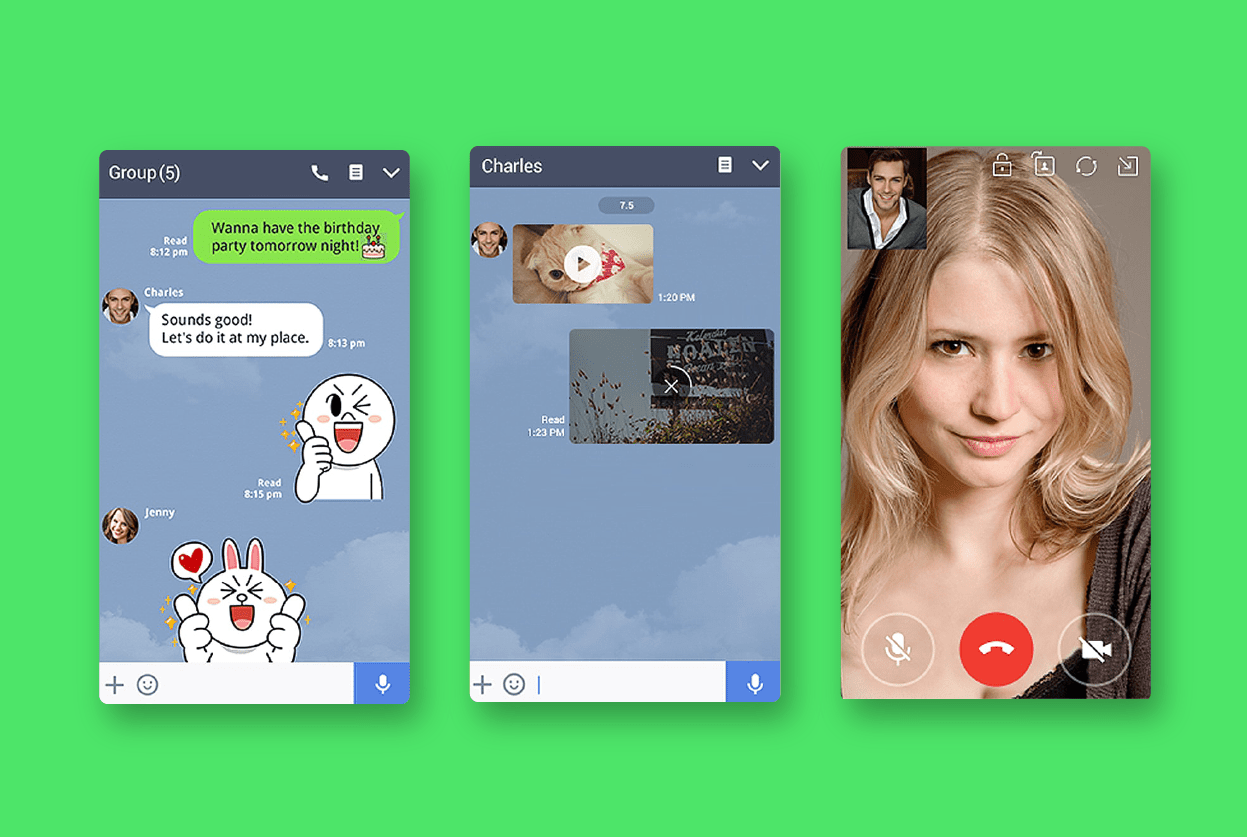 In Conclusion, Zangi has a distinct advantage in the least data consumption over other applications.

Out of this 5 apps, only Zangi and WhatsApp have the least data usage feature (see the green column in the graph above). This trend of “least data usage” is likely to become a trend that other messenger apps need to follow to deliver a better communication service.

Hey,
It was a good post about video chat apps for androids as it maintains top ten video chat applications. keep doing it in future also. Recently I discover a Mobile app mocospace login which is very useful for long-distance video provides high-quality video calling with better quality and connectivity. It has a very user-friendly design to explore new connections and create new videos invitations and introductions.

Hi,
I really like your article. You have shared many messenger apps for chatting that has the least data usage. Great post, thanks for sharing such an interesting article. Zabasearch is one of the best people search engines which finds information on people including their names, addresses, phone numbers and birth year.

These are definitely the best messenger apps that use the least data usage.
mocospace login and other areas of mocospace like mocospace chat, mocospace sign up and different ways of login via mocospace. Mocospace login page provided is similar to that of other social networking websites. Mocospace users can chat, upload videos and photos, and use instant messaging, play games and use application or participate in the forums.

Thank you for providing this good article about the best messenger apps. it’s really useful because there are many countries ban messenger apps, so we can use alternatively this apps as a messenger app.

great list of messenger apps. Thanks for this awesome post. Recently I Found a Mobile app mocospace login. Mocospace is one of the most famous ‘Mobile social network’ app. that Features include mobile games, chat, instant messaging, eCards, and photos.

Howdy! This blog post could not be written any better! Looking at this article reminds me of my previous roommate! He always kept preaching about this. I’ll send this post to him. Fairly certain he’s going to have a great read. Thanks for sharing!|

Thanks for sharing such valuable information with us.
I was looking for this kind of information and enjoyed reading this one. Keep posting.

Vote Up0Vote Down  Reply
Communication in the Modern Age: An Evaluation of the Different Messaging Apps | Wounding Thoughts