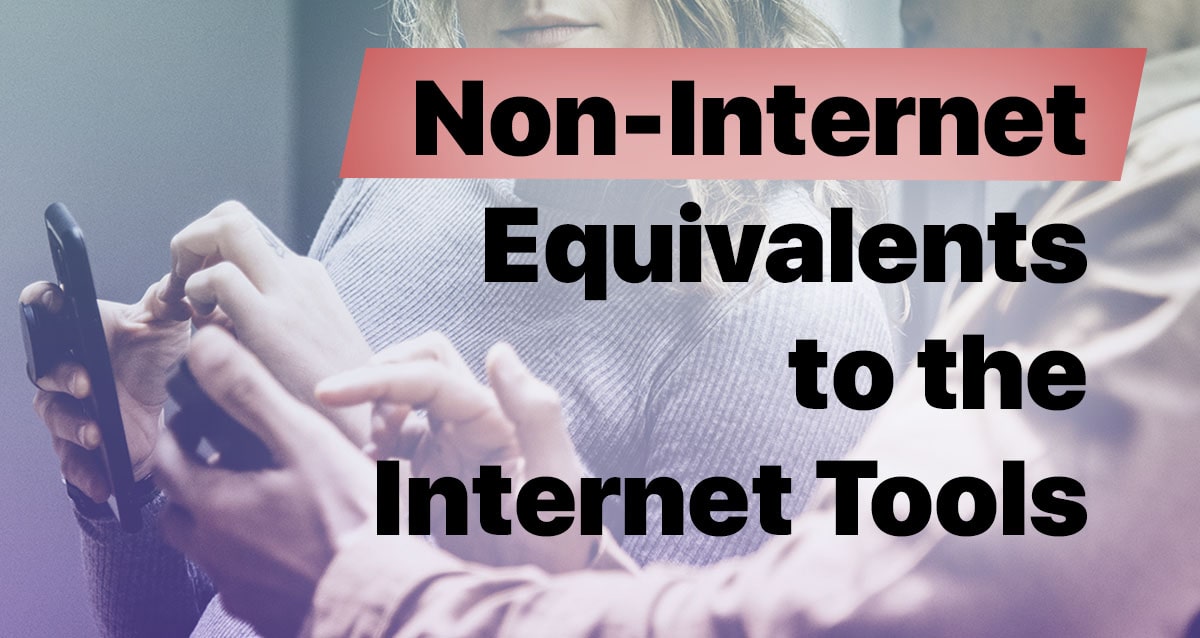 Sometimes, my Cox TV and internet service plan (yes, I prefer to pay for a 2-in-1 connection) goes offline. And this usually happens due to my inability to pay the dues on time. Or (and this occurs occasionally) when the connection line becomes saturated by several people using it simultaneously.

Making Do without the Internet

I live in a ten-story apartment building in downtown Brooklyn, with a single internet and cable linkage. This line is further distributed among all the residents in the plaza – which means that internet speeds get considerably slower during rush hours. On the ‘pm’ timeframe between 12 and 10 pm, to be more precise. Cable TV signals also become affected, leading to lower quality onscreen displays. And during these periods, watching movies, games and TV shows in HD resolutions simply becomes out of the question.

It is during such times of complete network disconnection or speed lags that I’m forced to resort to non-internet tools (in one way or the other). Although these utilities, which everyone is aware of, are not in the same league as their online counterparts; they are still something. And that says a lot, particularly when you want to get some important work done for the office. Or when you simply want to kill some time!

5 Internet Equivalents – for When You’re Offline

In this post, I’ll list five of these internet equivalents. And not all of them are material things, which you need to go to the supermarket to possess. Some are states-of-mind/perspectives which provide exercise for your mind during recess times. As such, this latter category of ‘distractions’ comes in particularly handy when you simply become sick of satisfying your bodily cravings, whether they’re centered on food-binging, watching TV, reading books, playing a sport, or pursuing something more carnal in nature.

So if you’re looking for some offline inspiration on keeping yourself busy with no internet connectivity, then I’d suggest you start taking some notes. And who knows, you might even end up knowing what to do in the event of any future apocalyptic scenario.

You know, the one where zombies or Terminator machines, or even Shrek’s legions of cuddly green offspring, become successful in their global takeover.

You get the picture.

I have always used a Windows PC for as far back as I can remember. For some reason, I’ve never warmed up to Apple’s sprawling range of notebooks and pocket devices. So the pre-installed Notebook and Microsoft Word word-processing modules comprise my go-to offline writing staples (as you’d imagine).

Normally, when I have to write an article or blog post, I use Google Docs. I find this option safe because the cloud interface automatically saves everything I type into it. Also, due to its constantly uploading nature, I can access the same document from any other device or computer.

But when I’m off the wire, sticking with the offline programs mentioned is my only recourse. And once I’ve saved my final written drafts to my computer’s hard drive, I take care to upload them later on.

If you hate to use traditional pen ‘n’ paper or have simply forgotten how to do so, then this option can save you from a lot of writer’s anguish. Which is a problem just as serious as writer’s block, if you didn’t know!

When you’re offline, and when you’re a solitaire (or any non-gambling oriented cards game) fan, then you have two options. You can either purchase a deck of playing cards to keep you company. In an old-school manner. Or, you can remain true to your digital roots, and stick to the pre-installed Solitaire game on your Windows system. If you spend most of your time on your smartphone, then you can easily download a free game app for the purpose.

Playing solitaire, as anyone who has done so can attest, is great fun. It not only helps to organize your mind, it encourages you to think creatively. And make accurate predictions regarding expected opponent moves in advance. When there happens to be no adversary, you can always play with yourself.
Cool right?

When considered holistically, there’s never a dull moment with solitaire in your life…that I can guarantee!

Another Windows classic, the Paint program is always there when you want to make some quick changes to your pictures. This can include cropping undesirable parts, adding prominent color hues and shades to inserting text boxes & descriptions. I know some digital artists (graphic designers) who actually swear by this nifty utility – and how it comes to their rescue when no other software is available. And particularly when the internet has gone completely out the window.

You can also use Paint to draw abstract, impressionist paintings like a new-age Van Gogh. Many postmodernist painters have even used it to create striking productions that later on fetched huge auction prices.

Nowadays, you can buy a neat little (or table stand-sized) abacus from school stationary shops. Some hardware retailers, in tribute to this ancestral inspiration behind the modern microprocessor, also offer them for purchase. And believe it or not, abacus’s can still prove their value when you’re off the line.

As per their basic design, they are great tools for making small to medium-ranged numerical calculations on their own. But when accompanied by some pen ‘n’ paper, they can even be used for breaking down complex figures in the thousands and millions range to single-digit numbers.

And if that’s not all, they have some pretty decent aesthetic appeal to provide – which you can use to convince your girlfriend/boyfriend of your innate nerdiness.

5. The Bedroom Window…and What Lies Beyond It

When was the last time you stood (or sat) completely still, and centered yourself? Like when you’re in the midst of a meditation or deep breathing spell. Not anytime recently, I’m assuming (and willing to bet!)?
Gazing out the bedroom window is not only a ‘stilling’ exercise, it also grants you with a new perspective on things. Provided that you allow it to, of course.

You can reinterpret ordinary things in several metaphorical ways to come up with newer understandings about the natural world. And who knows, you might even be able to weed out some creative insights from this process for your next big masterpiece.

As a fine arts specialist and writer,  I experience many amazing epiphanies like this. And most of these light bulb moments tend to come when the internet is out.

Like my mother used to say, ‘There aren’t any coincidences. Everything here happens for a reason’. I’d actually drink to that assessment…

If you’re interested in reading more informative & personalized tech accounts like this, subscribe to new verizon plans. Check out similar, engaging blog posts and reviews on the Thought Catalog and PC Magazine websites.

Equivalents To The Internet Tools